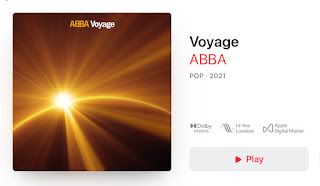 A key value of Zabrina and myself is to buy things we like. This goes no different for music, and we both love ABBA. Perhaps I haven’t really been listening to the words over the years (most likely) or maybe I am too focused on Amanda Seyfriend in Momma Mia to whom (or for whom..whatever) I have a huge crush at 57 years of age.

Getting off topic, anyway, Voyage came out by ABBA in 2021 and I really enjoyed pretty much all the tracks. Not only did I listen, but I really listened, to a point I came up that this album must be a ode to the life of Angetha Faltskog. Now, I am not clear on who wrote most of the lyrics on Voyage and for some reason my mind is made up and the album is a tribute or ode or memory of Angetha’s life.

Think of this as an interpretive review, not based on fact or inside knowledge of the inner sanctum of ABBA (of which I have none) and provide the author a great deal of latitude. I figure while the songs may not be in chronological order, the meanings go something like this for me:

1. I Still Have Faith in You

Here she feels she has somehow failed on her relationship, but knows “It’s in there”. But she also believes that he (Bjorn Ulvaeus is my guess) still has some accountability and they need to work together to work it out. She seems to take the high road…well, by the fact she’s singing about it and showing her openness on a shared responsibility (which I am guessing it isn’t).

2. When You Danced With Me

Clearly Angetha is in the grandma phase or at least remembering her love for her grandchildren. A very nice soothing tune I will add to my Christmas playlist. While some may call it cheesy, I think they really pull it off nicely and love the end where (I am guessing her own grandchildren) sing the closing verse.

Perhaps in the middle of the relationship while living in an apartment in close quarters, again she presents some share accountability to the relationship and ensures the message goes to the other half end encouraging to have them have an open mind, The tune throws in a bouncy beat, yet depressing at the same time. Apparently Bjorn “shut her down” at time and she is rebelling.

Chronologically, I suspect this is the earliest song in the memoir and she is fantasizing and day dreaming of meeting and building a relationship [with Bjorn]. Song has a nice beat and the topic isn’t quite as downbeat as “Don’t Shut Me Down”. Overall, she still feels hopeful the relationship will blossom.

One of my favorite songs (I don’t have a dog, but am a virtual pet owner). You get the sense the dog is unforgiving, yet senses the tenseness in the relationship. Guessing an older dog, but not sure on that, purely speculation. Bjorn or equivalent must yell and swear when fighting as she just calls out that the dog  cowls when he yells. In true Angetha form though, she shows she is both accountable to her actions, yet holds Bjorn (or similar) accountable to his actions. “And the dog is the first to feel it”…ugh, tugs at my heart strings.

Suspect “Dan” or the real child is represented here. She is going out of town likely for the first time since having a child; and requests Bjorn (or similar) to keep an eye on the child while she is out as he gets out of hand quickly. More emotional or forceful than probably needs to be, hope nothing went wrong. The song has a strong vibe to it, although a lot like all the songs, too depressing to dance to (albeit I don’t dance). She eludes that she is struggling with being away from the child. More could have happened during the latter parts of the song, but lost interest…may listen more when she gets back on Sunday.

Other reviewers bring more into this, so my interpretation could (and most likely) be flawed. Probably one of the few songs not about Bjorn (or similar) directly. My view, this is just about happiness with oneself and simply listening to bumblebees represents all life’s simple pleasures represent. You can be sad, happy, or just sit in your garden….bumblebees good.

9. No Doubt About It

Things have more friction in the relationship and her shared responsibility weakens although she tries to recover.  Could this mean she has “no doubt” that he is cheating to at least lost his love…but yet, she conveyed her acknowledgement that his response may be appropriate. A confusing song and not my favorite,

Such a grand entrance musically. But…I was way too worn out with the rest of the album to listen to the words. Too little too late from an attention standpoint.

Just my interpretation on the album and life in general.