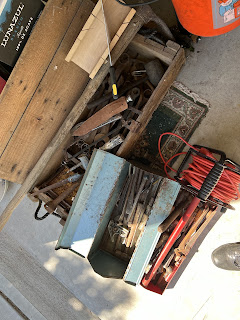 I bought several lots of vintage tools at auction…some good, some just some tools. But I wanted to clean off the rust before I listed some of them so after watching some YouTube videos and seeing what I had and needed, came up with this contraption. No DeWalt was injured in the process.

Used a lot of zip ties and will improve down the road. I wanted to do a hanging implementation as sounds like it will agitate better. 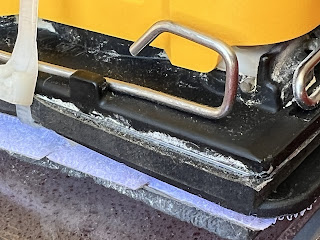 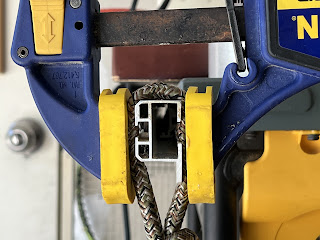 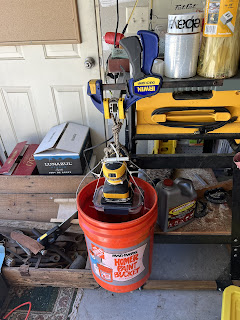 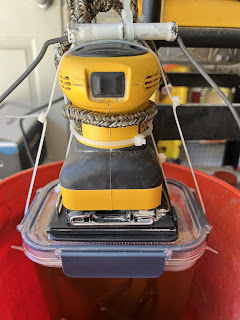 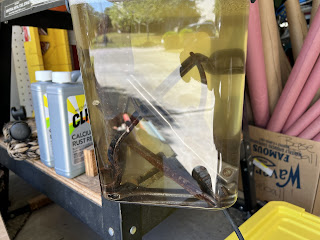 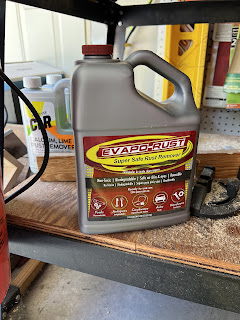 The bucket is a safety in case something goes wrong and the container somehow comes off. It is held on with Velcro but wasn’t too confident so added some zip ties as well. I had an old plate for the sander and bolted that to the lid and put Velcro on it as well.

For solution, went to Harbor Freight and got Evapo-Rust and we’ll see how that works, kinda pricey at $30 for a gallon (or less), so hopefully you get what you pay for. Also got some CLR to try for larger items as I can mix with water.

Well, never got to the cleaning part, as I was typing up the initial blog post, several zip ties broke. Glad I had the bucket. A little too creative of an initial effort. There was also a small amount of liquid that came out of the lid seal, but the bucket handled it and easy enough to address with just using a little less solution . Oh, and it was loud, glad the wife is out of town for a few days. 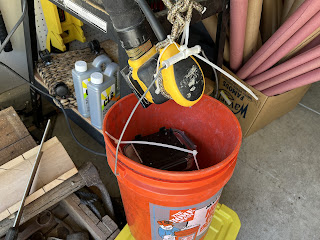 Decided to go simple and back to basics. I had a tie down strap with a simple friction clasp and just wrapped it around the bucket and sander. I feel better about this implementation. 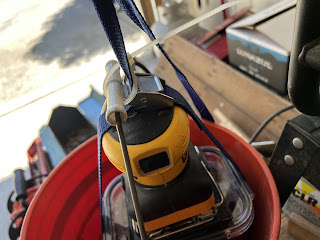 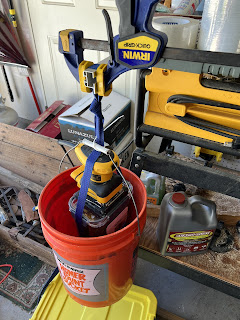 Well it worked, sorta. Cleaned well, but then the Velcro and plastic holder melted  but, turns out the evapo-rust is so good I really didn’t need this and will just do with no agitation. Moving on.

Evapo-Rust at Harbor Freight costs about $30 per gallon, the stuff is awesome. Thumbs up, don’t even need to mess with agitation and its re-usable. 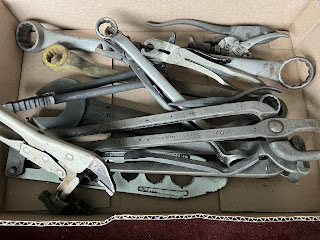 This is a draft of my price list for custom framing. It is a work in progress and feedback welcome. An example pricing for a small piece, using recovered wood frame and glass (no resizing), single one opening mat would be $18, medium $34, and large $53. Costing is composed of a frame, glass, mat board and assembly charge. How to Use The intent is that you pick one frame, one glass, one (or more) mat optional, and appropriate assembly charge. Add them up for the estimate. Size is based on largest length or width which cannot exceed specified dimensions, for example if you are framing a piece which is 10” x 33”, that would be a Large. Custom Framing Price List - Last Update 9/2022 Description Small up to 16” x 20” Medium up to 20” x 32” Large up to 32” x 40” Notes *** FRAME *** Frame - Wood - Recovered 3 5 10 Frame - Metal - Recovered 5 9 13 May have some limitations on certain sizes. Most common are black and gold. Frame - New Call Call Call Frame Resizing Charge (Wood Only) - Recovered
Read more 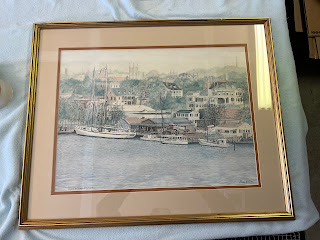 Here is the third volume of framing projects, a continuation of  Volume #3 . For pricing information, go  here . I got these 2 pictures from an estate sale (might have gotten the Ronald Williams one at OMT Auction). I did a refresh on them both.  Ronald Williams, Historic Wilmington on the Cape Fear is a signed and numbered print. While the frame was good along with glazing, pretty much had to redo the rest. Cut new double mat for it on some colors I had around, added a Foam Core backing, dust cover, and added proper hardware to it.  For sale on eBay here . The B. Cummings, Spring Fever was generally OK, but the glass was dirty on the inside, so disassembled, cleaned glass and added fresh dust cover and probably used existing hardware it had.  For sale on eBay here . I picked up 2 Bob Rankin posters and found they were signed at an estate sale (from Sort it Out, good people). A friend and repeat customer bought it and had me frame it. She likes metal frames, but decided to upgrade to a
Read more