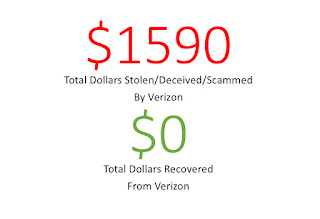 Let me start off and just say that this is a flat out RANT. I have had such a terrible initial experience with Verizon, and just had to get it off my chest.

In November of 2021, we decided that we were tired of the poor coverage in our area provided by Sprint (now part of T-Mobile). Our phones were in need of replacement (we have 3 lines, all iPhones) and we also wanted to see if we can get a more competitive price plan which included mobile hot spots. Heck, Andy, my neighbor works for Verizon and I trust him (he works with network security side and not the phone side)…what could go wrong?

We selected Verizon and I will say that the coverage is the only good thing we have experienced so far, but I’ll take it.

It all start off when I went to our local Verizon store in a new shopping center (11710 Retail Dr., Wake Forest, NC 27587 for those taking notes) and informed them that I was interested in moving our 3 lines and also a phone upgrade in the process. I was told:

There was a rebate (Pre-paid Visa Card) of $500 per line moved over, but this did not allow for an upgrade; I can wait for 3-5 days and then do an upgrade and still get the rebate.

Well, that flat out turned out to be wrong and they essentially lied and stole $1500 from me. Yeah, kinda pissed on this one. Apparently you cant upgrade for 30 or 60 days or something. So I went to the store where “Kevin” the manager was there, he heard my issue and essentially passed me off to another person that would end up doing nothing…spineless POS. So then I go to “Kenny” and he said he should be able to get me to get the increased trade-in value which would give some compensation and he was going to follow up and get back to me. Bad “Kenny”…follow-through is a pretty important skill to have in business.

I signed up for Autopay, did the bank draft and never saw any $10 credit per line. In February 2022 I called Verizon on this and also found that this should be correct as documented on the FAQ on the Verizon web site. What gives? The support person stated that this was only for 4 lines or more. I blew my top on this, told them they can give me my $10/line, backdated credit, and $10/line moving forward or I am done with Verizon. The support person to their credit responded and did all the above - although I firmly told her that I was not mis-informed and that the web site is wrong and makes no mention of any 4-line requirements. Total BS IMO. Point being, make a stink, they should get you the AutoPay discount if they are not properly giving it to you and also historical back credit.

Update 2/18/22: The changes to properly credit $10 for each line with Autopay still hasn’t kicked in along with the historical back credit  also charges for Verizon Cloud not removed. Back on the phone, what a joke.

Update 2/21/22: It is possible I was mistaken on this ads it was $65 and am now getting my $10 AutoPay discount…for some reason in my head I was thinking it was going down to $45 per line…I’ll let this one go.

Verizon Cloud 600GB was included in the Do More, Play More plans. A nit and I have enough cloud services and dont use it)

I was told the Verizon Cloud was going to be part of the Do More and Play More plans, but it turned out not to be true. This is more of a nit as I don’t use it and the integration into devices is terrible. I’ll stick with my OneDrive which has served me very well.

Now how this got added to my account is a mystery. Takes a thousand cuts, and all, sucking me dry.

What would I do differently (with Verizon or any new cell service/transfer):

1. Get your offers documented in writing in every last detail. You will need evidence should something go wrong.

2. Wait 60 days until I upgraded the phones regardless of any documentation; it wasn’t that urgent, but was excited about the new iPhones and wanted the better camera.

3. Pay VERY close attention for at least the first 90 days and then review every 90 days. Sometimes kids add things, the carrier adds it due to changes.

4. When your in a store getting issues resolved, don’t leave the store until fully resolved (or exhausted). They are unlikely to followup and get back to you. Push it while you have them face to face whatever it is.

5. In the end, I should have done more research before selecting Verizon to see if other options with good coverage in our area.

I am finding it hard to believe the business practices which are employed by Verizon. I speculate that if some creative carrier truly treated customers right, did the right thing, gave a good price and a fair services, their business would go crazy. Verizon is like Spectrum/Time Warner but worse (at least Spectrum does it right in front of your face), both employ very similar practices and hope to get away from Spectrum sooner sooner than later - 1 gigabit just came into our area, now have to figure out how to get VOIP QoS which is key for the transition.

One thing I did is I put a review in Google Reviews for that store with 1/0 stars and summary of above. A representative stated for me to reach out to them via email with review reference. I did…they never got back to me to this day. 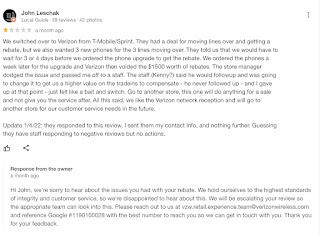 Thanks for listening, now I can sleep at night.

Verizon: Sue me if you want, this is just how it happened. Fire the manager and employees involved in this debacle if you want to make a difference - or just give me back the $1500 you stole from me - it will be cheaper and have a better outcome.

Was messaging with Carrie on Verizon, here’s her thoughts: 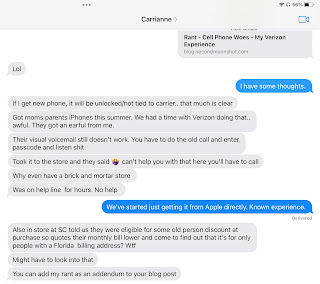 Nothing in Particular Rants