Every once in a while, our cat Sydney will get on the table where I am taking pictures and I can’t help but include her in a cameo in the eBay listing. Last night, she jumped in the bed and went to sleep, snoring like a Sherman Tank as I petted her. Got me thinking about Sydney and all the cats that have come before, and even my daughter’s current Trooper) and past pit bulls - and the joy they bring us. 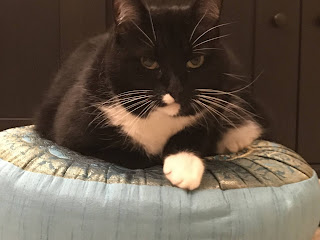 Sydney is probably the best cat I have ever had. She uses her litter box religiously, has ruined every couch and chair we have owned since we got her, nightly goes into each persons room to sleep with them for a few hours then moves on to the next. Oh, and the best part, she does not meow…nope. In its place, she just claws at whoever is near by or knocks her food or water bowl over to let us know she has needs; such as notifying us she wants to come inside, she will claw at the outside door molding (now the molding around every door is ruined). 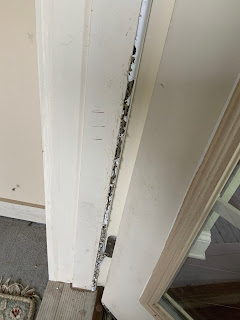 When Ali, our daughter now 18 years old, was 10 or 11, her mom went out of town and that left me with the daunting job of entertaining a child; lets just say parenting isn’t my sweet spot. So I did what any good father would do in such a situation and took her over to PetSmart, got Sydney (think she was the only kitten that day), life was good…then Zabrina came home from her trip…not happy to start with. Now Sydney is at Zabrina side and sits with her as she reads and they are inseparable. Sydney is a first class part of this family. She is now an indoor / outdoor cat, is well known in the neighborhood, and pretty much has full freedom to do anything she wants (other than go out when its dark).

Other than the fact that she doesn’t meow, she has a few other interesting characteristics. First, she snores….LOUD. The other thing is that if we put her food and water bowl together too closely, then she will pick up pieces of food in her mouth or with her paw and drop it into the water bowl….and play with it  until she captures it then eats it. We now have used some special trays to keep them properly separated. These were actually some fajita or steak plates that are pretty heavy so they are dual purpose and also keep her from knocking the bowls off when she is trying to let us know something is empty or water is not at the right temperature (or properly filtered). 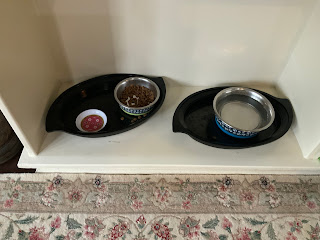 Now, I think this only happens when she is with me sleeping, but she will only stay with me if I am laying on my side facing her and constantly petting. As soon as I roll over and face the other way….gone. Don’t think that is the case with anyone else.

One of the interesting things that seems to only be a habit when she is with Zabrina during nightly reading is that without fail, once the book is opened, she will jump on the bed and lay on book and purr like crazy. Eventually she moves her to the side, but she will stay there until the reading session is over. She does something similar when we are doing a puzzle on the dining room table, without fail she will jump on the table and just lay right on top of everything, tail flying and knocking pieces all over the floor. “Why is that broken picture getting more attention then me!” 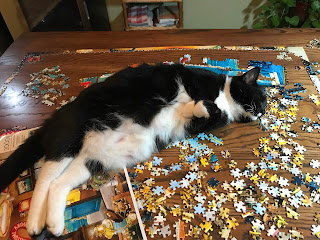 I have only had one dog, just didn’t go well…lets leave it at that. But my oldest daughter, Carrie, has a passion for pit bulls. She helps with rescue dogs and has been a foster for many abandoned and abused pit bulls. Trooper is her latest permanent pit bull and she got attached as she was fostering him and decided to adopt. In June of 2020, my daughter and I took a trip from Los Angeles back to Raleigh and took most of Route 66 for that journey. This was during the peak of COVID-19 and we decided to camp along the way, a friend of KOA. Since finding a hotel that will allow pit bulls would have been a challenge, we took this route and had a great time. 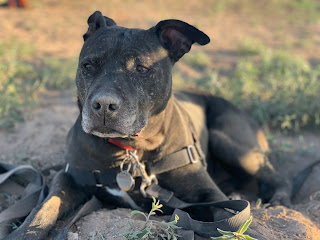 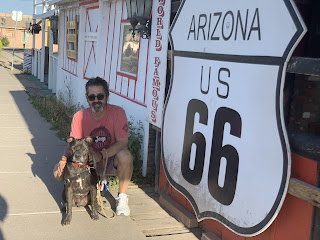 We tent camped and I got to know Trooper (and my daughter) along the way. Loves chasing squirrels, does not like you to touch his belly without proper warning at 2am in the morning, and likes to sleep under the covers.

My son, Mitch (5 years younger than my oldest daughter) is some kind of a dog whisperer. For whatever reason, every dog she has dad, he creates an instant bond and I am sent to the curb.

Merging pets and cars. A few months ago, my daughter got into that accident with her Jeep. Not her fault, no injuries, but was in the ship for 2 or 3 weeks. In true fashion, I heard the word “Daddy” (she only says “Daddy” when she wants something..she’s 28 for heaven sakes)….well “Daddy, can I borrow your car?”. I have 3 cars and only 1 of them is automatic, the 2016 Porsche 911 4S…she got it. First day she went over to see her mom, she locked the keys in the car…with Trooper. She called me and I brought the spare key over and unlocked the car, not stopping to look in the car or see what that dog might have done…just shook my head, smiled, unlocked the car from far away…and drove off. The world didn’t end.